In last month’s Anchoring Extras I described the use of an anchorwatch strain gauge device which measures the tension on the anchor cable in kilograms. I concluded that the profile obtained of Westbound Adventurer at anchor in different wind strengths allows me to calculate how hard astern I need to go to dig it in to ensure a good night’s sleep even in a rising gale.

THE RIDING SAIL Some years ago Westbound Adventurer was well anchored in the Wizard Pool of Loch Skipport, South Uist in the Outer Hebrides of Scotland. There was a good blow with downdrafts coming off Hecla which rises above the Wizard Pool. I was busy comparing the behaviour of my yacht with that of a Contessa anchored nearby. Westbound Adventurer was doing a jig compared to the stately minuet of the Contessa. This is partly due to the underwater profile of the Sigma 33 (DCB of 0-5metres) and also, I believe, partly due to the fact that Westbound Adventurer is unique as a Sigma 33C because the first owner of my yacht had a Warwick Collins Tandem Wing Keel fitted.

This keel has 3 advantages for sail cruising. 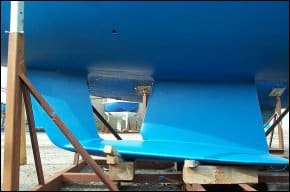 The one disadvantage of this keel is that Westbound Adventurer tends to dance about at anchor in strong winds. The riding sail however has tamed her. I have measured the arc through which the stern swings with and without the riding sail. The riding sail reduces this swinging arc by about 15 degrees but perhaps more significantly the speed at which she swings is reduced which in turn diminishes shock loads on the anchor cable. When winds are very strong my own preference is the use of 2 anchors from the bow (the fork moor) with the riding sail set.

This sail is simply hanked onto the backstay with an improvised strop on the tack to a strong point in the cockpit. The main halyard or the topping lift hoists the sail to the desired height and sheets are led forward and tensioned on a suck it and see basis.

THE ANGEL   There have been many articles written about the use of an angel and some cruising yachtsmen have strong opinions for or against them. Indeed, almost every aspect of anchoring has an army of experts with strong views. As a Sailing Instructor I try to point out the pros and cons of different techniques to help cruising yachtsmen form their own opinions.

It appears to me that some valuable and fairly convincing research has been done which concludes that an angel needs to be very heavy to have any significant effect. This raises the question of whether it would more useful to invest in a third anchor instead of 2 anchors plus an angel?

For Westbound Adventurer the chain of my third anchor cable (which weighs 35 kg.) is made up and stowed as an angel but can be converted to cable by undoing the bindings. It is stowed in the centre of the yacht so as to reduce the weight in the bow and is assisted from its locker in the saloon by a halyard through the hatch!

I am not suggesting that most cruising yachts should have 3 anchors. I have chosen to have 3 anchors with their own cables because my summer teaching cruises are spent in the Scottish Hebrides where anchoring is the norm. I use the angel very occasionally as Westbound Adventurer is seldom in a crowded anchorage where it is desirable to reduce the swinging circle.

It could be argued that in a marginal anchorage in a rising gale an angel might be better than a second anchor so that you are not faced with the possibility of buoying and dumping 2 anchors and cables. On the other hand it is possible that 2 anchors might hold longer than 1 anchor with an added angel? No text book or article can be dogmatic about what to do in a marginal anchorage which we all try to avoid in the first place!

THE LINE ASHORE   There are a few occasions when a line ashore might be considered in addition to or instead of an anchor. When the bottom is rock or known to be very poor holding it could be considered in an offshore wind. In the photo below there is a convenient ring on the rock and the line is led back to the yacht for ease of departure. The engine is running slow astern as there was no wind at the time but the yacht was not left unattended.

A variety of devices could be used for the attachment ashore but whatever the hardware selected I would suggest the following method:

An alternative is to take the warp ashore, secure it, then row it back to the yacht but I would not recommend this unless there are 2 people in the dinghy.

One concern about a line ashore is the wind changing direction overnight! Perhaps an angel astern might be a suitable precaution but on the other hand an anchor watch by the crew may be prudent if a wind shift is forecast. In a marginal situation a few hours rest for all on board can make a big difference before clearing out is essential. It may be necessary to abandon the hardware ashore if the line has been led back to the yacht or even to abandon the whole system if a single fixed line has been set up.