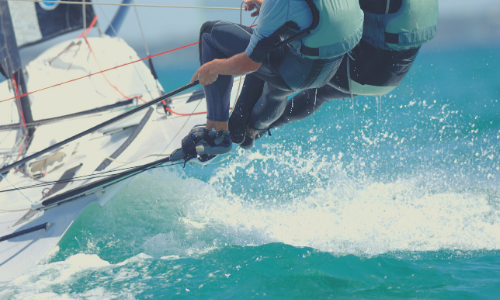 Sailing is a water sport, practiced in open water, where the Yacht is moved by the action of the wind on the sails. In 1868 it was recognized as a sport. The competitions are called regattas. In them, nine boats participate and are divided into light sailing, cruising sail, and Olympic sailing.

The International Sailing Federation, The origins of sailing, are not very clear since Egyptian engravings have found forms of ships driven by sail, it is believed, navigated the Nile River and the Red Sea carrying cereals and livestock. The Iberians, Celts, and Greeks followed the steps in navigation; the Phoenicians were a merchant town par excellence that used boats to move, while the Romans used them as weapons of war.

The international regattas began in 1851 when several members of the New York Yacht Club built a 30m schooner called America, that boat set sail for England, where it won the Hundred Guineas trophy, after participating in a regatta around the Isle of Wright, organized by the Royal Yacht Squadron.

Although some developed countries practiced sailing as amateurs, it was July 1, 1868, which called a congress sponsored by the British Royal Victoria Yacht Club to create the rules of the sport. In 1906 the decimal metric system was accepted in the measurement rules, just as in 1907, the International Sailing Federation (ISAF) was founded, the body responsible for regulating competitions.

Sailing is an ecological sport because it does not use fuel, so it does not pollute the environment. ISAF is the body responsible for regulating competitions.

Within the dinghy sailing, the most prestigious competitions are the world championships of each class divided into snipe, Optimis, Vaurien, Sunfish, and the Olympic Games.

Optimis is the primary school of sails, practiced by children between the ages of 9 and 15, training in small individual boats. In a circuit marked by three buoys at sea, can be individually or collectively, it can take up to two hours attending to the state of the sea and the wind direction. The boats are build of fiberglass and wood. The hull weighs 35 kilos, and the measurements are accurate 2 meters forty long, one meter 15 wide and 50 centimeters high.

The sail also adjusts to select measures and characteristics, has the shape of the wing of an airplane, rests on the mast, and the competitor must regulate it according to the conditions of the wind and waves, the countries. The manufacturers are Argentina, Denmark, the United States, and Spain, and they are expensive, the first level has an approximate price of four thousand dollars.

Optimis beginnings and roots are in a town in Florida, when Optimis International, a Rotary organization, hired a local designer to make a free version using the wooden boxes on wheels that the children built to slide down the streets.

The first Optimist was built in 1948, six years later, in 1954, a Danish brig promoted it in Denmark with excellent results, and shortly after it became popular in the other Scandinavian countries. In the 1960s, Optimis began to expand throughout Europe, in 1965 the International Optimist Dingui Association (IODA) was founded. In the 1970s, it takes place in Asia, Africa, and Latin America. It is currently the most numerous sailboat class in the world.

As in any sport modality that is respected, in the Optimist, there are precise rules at the time of the competition, for example, before starting, the competitors are given what is known as the racing instructions, where all the details of the proof.

The first sign is a white flag with the Optimist class badge, in addition to a yellow flag. After three minutes, these flags are lowered, and a blue one rises that rises a minute before departure. Sixty seconds later, the red flag is raised, indicating the immediate exit of the regatta.

The sail was release Olympic sport at the Olympic Games in Paris in 1900, it was only excluded in 1904, but boat classes have changed with some frequency. The Olympics of 1996 had eight classes: Tornado, Laser, Europe, Soling, Star, Finn, and the Mistral-class windsurfing (men and women).

It is more selective, and the most important competition of this specialty is the Copa América.