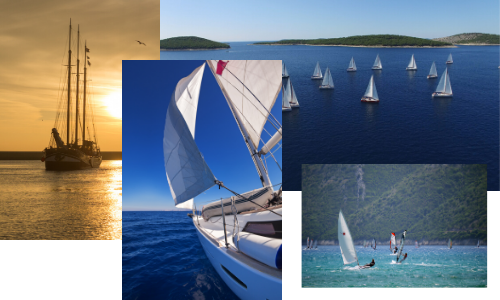 From old age, coastal towns built boats to fish or move through the water. The next step was to set out to explore other territories.

The origins of sailing go back thousands of years. Since primitive times man has felt the vital need to enter the sea, either to get food or to explore new horizons. Probably, in the beginning, it used logs, after rafts made of wood tied with lianas, after canoes, canoes, and boats increasingly sophisticated and driven by oars first and candles afterward. They were the beginnings of sailing, the oldest way to transport people massively from humanity.

Although the first evidence of human concern for sailing dates back to the Mesolithic era, it was with the development of the great ancient civilizations when the first relatively advanced vessels appeared. More than 5,000 years ago, the Egyptians built different types of ships to sail the Nile, their main route of communication. Later, Phoenicians, Greeks, and Romans set out to conquer the Mediterranean with increasingly developed ships. One of the characteristic features of many of the ships of that time was the presence of several rows of oars to gain more momentum. These are the ship’s characteristics of the major civilizations of Antiquity

Given the vital importance of the Nile River –its main route of communication– the Egyptians from ancient times they developed different types of boats, such as boats made of papyri, passenger and funeral ships and warships. The classic Egyptian boats had the bow and stern raised and had a mast and a square sail that rested on the lower cock, the superior being the mobile. When they sailed the Nile northward, in favor of the current, they used the oars, and when they went southward, they deployed the sail to take advantage of the wind in favor. In the Mediterranean, they used similar double-rudder ships-the keener-made of wood and conducted sabotage sailing

Expert sailors, the Phoenicians, were the big drivers of the commercial exchange in the Mediterranean during the I millennium. C. Theirs were the sites richest in metals, thanks to their innovative ships –trade and war–, his knowledge of nautical and daring. Its main commercial route ran from the city of Tyra (now in southern Lebanon) to its factories in Gadir (now Cadiz). In total, sail the 4600 miles over 50 days, stopping in various ports, with ships of between 20 and 30 meters’ length in the transporting a hundred tons of merchandise. During the trips, they used to colonize other villages and even went to bypass Africa.

From the beginning of the archaic era, in the 8th century BC, the main Greek cities used the expertise of their sailors and the quality of their boats

to colonize the entire Mediterranean coast. From the 6th century BC, the threat of the Persian Empire forced the Greeks to develop a new warship, based on the ancient penteconters used in the Trojan War. As the name suggests, the triremes had three-row benches, arranged on a different level, allowing them to reach a speed never seen before. Narrow, long, with little draught and light, these ships stood out for their great maneuverability.

Although Rome did not invent galleys, it was a maritime power with a large fleet of such ships. Incorporated during the 3rd century BC, they quickly provided the Romans with complete dominion over the Mediterranean. The galley combined oars and candles, although if the wind blew from the front, it could only use the strength of the oars. Its metal-reinforced Spurs on the float line were used to attack enemy ships. Liberia was a model of bireme galley devised by the Romans. Light, fast, and with great maneuverability, it was used in different battles like that of Actium (31 BC), in which the Roman navy defeated the fleet of Mark Antony and Cleopatra.